For the use of Registered Medical Practitioners or Hospital only

Tazoprime injection is an antibacterial – a combination product consisting of the semi-synthetic antibiotic piperacillin sodium and the β-Lactamase Inhibitor tazobactam sodium for intravenous administration. Pipracillin Sodium is derived from aminobenzyipenicillin. The chemical formula for Piperacillin sodium is C23 H26 N5 Nao7 S. It has a molecular weight of 539.6. Tazobactam Sodium, is a penicillanic acids sulfone derived from penicillin nucleus. The chemical formula for Tazobactam is C10 H11 N4 NaO5 S molecular weight 322.3. It is a beta-lactamase inhibitor.

The bactericidal activity of Piperacillin Sodium is brought about by inhinnition of septal formation and the cell wall synthesis. Tazobactam Sodium is a β-Lactamase Inhibitor of Richmond Sykes class iii penillinases and cephalosporinases. Tazobactam does not induce chromosomally mediated β-Lactamase at tazobactam levels achieved with the recommended dosage regimen. 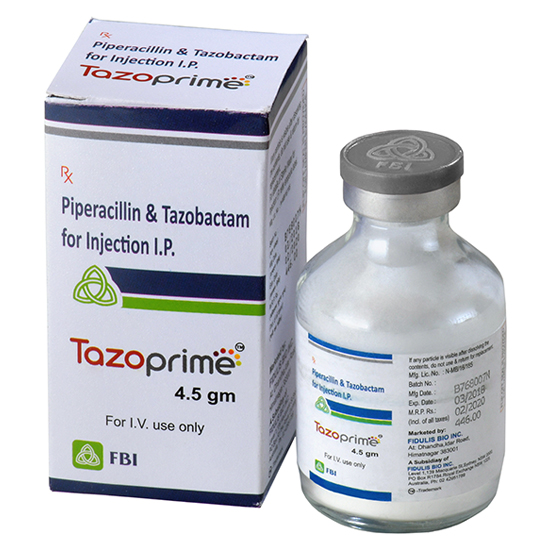 The mean tissue concentrations generally are 50% to 100% of those present in plasma. As with other penicillins, distribution of Piperacillin and Tazobactam into cerebrospinal fluid is low in subjects with non-inflamed meninges.

Tazobactam is primarily eliminated by renal excretion with 80% of the administered dose excreted as unchanged drug and the remainder as single metabolite.

Piperacillin-Tazobactam mono-therapy at a dose of 4.5g every 8 hrs has been shown to be significantly more effective than ceftriaxone plus gentamicin as first-line therapy in febrile neutropenic patients with hematological malignancies* Further, in patients with intra-abdominal infection caused by perforation of the large bowel and rectum or dehiscence of the anastomosis after resection of the large bowel and rectum, piperacillin/tazabactam showed an excellent activity. The study suggested it to be the antibiotic of choice for the initial empirical antimicrobial treatment in this condition on account of its great efficacy against the majority of isolated bacteria, its safety and low toxicity**

Piperacillin/Tazobactam is contraindicated in patients with a history of allergic reactions to any of the penicillins, cephalosporins or beta-lactamase inhibitors.

Serious and occasionally fatal hypersensitivity reactions have been reported in patients on penicillin therapy, which requires immediateemergency treatment with epinephrine, oxygen, I.V. steroids and airway management including Intubation.

Pseudomembranous colitis has been reported with nearly all antibacterial agents including Piperacillin/Tazobactam.  One primary cause of pseudo-membranous colitis is a toxin produced by Clostridium difficile. Mild cases usually respond to the discontinuation of the drug . Moderate to severe cases should be managed with fluids, electrolytes, protein supplementation and treatment with an antibacterial drug clinically effective against Clostridium difficile.

Abnormalities of coagulation tests such as clotting time, platelet aggregation and prothrombin time have been noted in patients especially with renal failure on β-lactam antibiotics including Piperacillin. This may lead to bleeding manifestations. In such cases, the medication should be stopped and appropriate therapy employed.

Patients of cystic fibrosis may develop increased incidence of fever and rass with semi-synthetic penicillins including Piperacillin.

Fasle-positive reaction of glucose in the urine using a copper reduction method has been reported with penicillins including Piperacillin/Tazobactam. Hence patients on Piptal should be recommended enzymatic glucose oxidase reaction tests.

Long-term carcinogenicity studies in animals for piperacillin alone, tazobactam aloe or their combination have not been carried out. However, Piperacillin/Tazobactam was found to be negative microbial mutagenicity assays, mammallan point mutation and mammallan cell transformation assay.

When given a maximum recommended human daily doses based on body surface area, re-productivity studies in mice revealed no evidence of impaired fertility or teratogenicity due to Piperacillin/Tazobactam.

Piperacillin and tazobactam are known to cross the placenta in humans. Since animal reproductive studies do not necessarily predict a similar human response, and since there are no direct human studies showing the safety of Piperacillin and Tazobactum in pregnant women. Piptal should be used during pregnancy only if clearly needed.

While the concentration of Tazobactam in human milk has not been studied, Piperacillin is secreted in the milk in small amounts. Hence caution should be exercised while administration of Piperacillin/Tazobactam to a nursing woman.

Safety and efficacy of Piperacillin/Tazobactam in pediatric patients has not been established.

While age as such is not a criteria for patients over 65 years of age to be considered at an increased risk of developing adverse effects due to Piperacillin/Tazobactam therapy, dosage should be adjusted in the presence of renal insufficiency.

Nausea, vomiting and diarrhea, have been reported to occur with accidental over dosage, similar to the ones observed with usual recommended dosages. In case of a large IV overdose, neuromuscular excitability or convulsions have been reported, particularly in patients with renal failure. In absence of having no specific antidote for Piperacillin/Tazobactam over dosage, the management is essentially supportive.

It is possible to reduce the excessive serum levels of either Piperacillin/Tazobactam by hemodialysis.

Piperacillin/Tazobactam should be administered by intravenous infusion over a period of 30 minutes. (See directions for use)

In patients with renal Insufficiency, the following dosage schedule is recommended:

For hemodialysis patients, the maximum dose is 2.25g every eight hours.

Reconstituted Piptal solution should be further diluted (recommended volume per dose: 50 ml. to 150 ml) in a compatible intravenous diluents (0.9% Sodium Chloride for Injection or Dextrose 5% and administered by infusion over a period of atleast 30 minutes.

When reconstituted as directed, solution are stable for 24 hours when stored at room temperature (25°C) and stable for 48 hours under refrigeration (2°C to 8°C)

Store between 15°C-25°C.  Protect from light and moisture.