Its structural formula is : 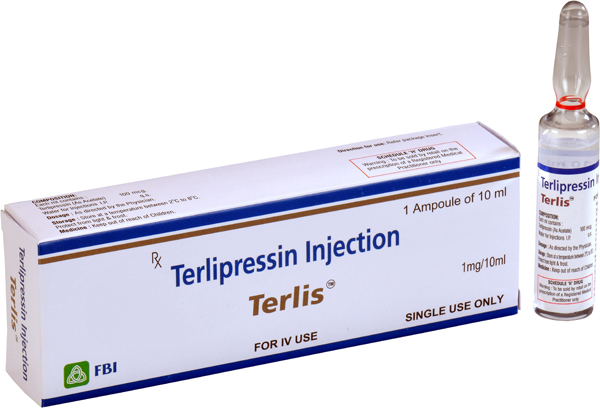 In addition to its vasopressor effects, terlipressin stimulates myometrial activity, even in non pregnant uterus.

Terlipressin as such is inactive in relation to smooth muscle but it serves as a chemical depot for active pharmacological substances formed by enzymatic cleavage process. Copared with lysine-vasopressin, the effect  comes more slowly, however much longer.

Lysine-vasopressin is subject to usual biodegradation in liver, kidneys and other tissues. The intravenous pharmacological profile can be described using  a two-compartment model. The excretion half-life is about 40 minutes, metabolic clearance about 9 ml/kg x min and distribution volume about 0.5 l/kg.

Estimated lysine-vasopressin concentration can be found in plasma, 30 minutes after administration of terlipressin with peak values after 60-120 minutes.

Bleeding in gastrointestinal and urogential systems such as esophageal varies, gastric and duodenal ulcerations, functional and similar types of metrorrhagia and in case of miscarriage or abortion and similar situation.

Bleeding occurred as a result of operation, in particular those in the abdominal and pelvic area.

Local application in gynecological operations, such as cervix porta uteri.

Terlis must only be administered intravenously.

Initial bolus dose 2 mg should be administered by an intravenous bolus injection over one minute, followed by 1 mg – 2 mg every 4 – 6 hours for nex 24 -48 hours. For prevention of bleeding recurrence, continued medication shall be recommended, until the bleeding has been controlled. The dose shall be administered I.V.( as a rule bolus ) injection or short-tern infusion.

Other types of gastrointestinal hemorrhagic :

Bleeding from the splanchnic region in children :

The usual dose ranges from 8 to 20 mcg/kg  of body weight given at intervals of 4 – 8 hours. The administration of the dosage should be continued throughout the period of bleeding. The general dose recommendation is as in cases of bleeding in adults. For sclerotized oesophageal varices a single dose of 20 mcg/kg body weight is given in bolus form.

Bleeding from the urogenital tract :

For juvenile metrorrhagia, doses of 5 – 20 ɯg/kg of body weight are recommended. The administration should be intravenous.

Add saline to 0.4 mg ( 400 mcg ) dose to obtain 10 ml and apply intracervically or paracervically. The effects of such preparation can be seen after approximately 5-10 minutes.  If necessary, increase or repeat the dose.

In 2nd and 3rd trimester of pregnancies, the benefits against risk of administration always should be considered.

When administering Terlis especially in higher doses (0.8 mg = 800 ɯg and more), tight monitoring of blood pressure, heart rate and liquid balance is recommended. This is specially for patients with hypertension, heart insufficiency and elderly patients.

Terlis is not a replacement of blood substitution in patients with blood volume deficit. Regarding individual cases of local necrosts, reported after administration of terlipressin, an intramuscular administration of 0.5 mg (500mcg) doses and more should be avoided. Intravenous administration is increasingly preferred.

Terlipressin distribution in breast milk is not available; however significant absorption of unchanged peptides in gastrointestinal system of child seems not be probable. There is no definite data on terlipressin use in lactating women.

There is very limited clinical experience in children, caution to be exercised during use in this group of patients.

There is very limited clinical experience in elderly, caution to be exercised during use in this group of patients.

Both oxytocin and methylergometrine increase the vasoconstrictive and uterotonic effects. Terlipressin enhances the hypotensive effect of non-selective blockers in the portal vein. Concomitant medications with substances lowering heart rate can result in serious bradycardia.

The recommended dose (2 mg/4 hour ) should not be exceeded since an exceeded dose increases the risk of serious effects on the systemic circulation.

Increase in blood pressure in patients with known hypertension has beencontrolled with clonidine 150mg I.V.  Severe bradycardia should be treated with atropine.

Parenteral  drug products should be inspected  visually for particulate matter and discoloration prior to administration, whenever solution and container permit.

Store at temperature between 2°C to 8°C protect from light and frost.

One ampoule of 10 ml is packed in carton with insert.